Sunday sees Croke Park host a triple header of Ladies football finals as the Ladies Gaelic Football Association aim to #changetherecord targeting a record attendance. GAA followers are just coming to terms with the titanic battle between Dublin and Mayo last week and are eagerly awaiting the replay next Sunday but the fourth Sunday in September is reserved as Ladies day. Antrim and Longford open proceedings in the Junior final, followed by the Intermediate clash of Clare and Kildare before the curtain raiser between Cork and Dublin in the Senior final.

Parallels could be made between the teams in this years Senior Ladies final and Mayo and Dublin in the men’s senior final. Cork have been dominant as they go in search of their sixth title in a row and although the Dublin men have yet to reach such heights similarities are evident. Dublin Ladies on the other hand could be viewed in the same light as Mayo, the team continually knocking on the door with agonizing final defeats in the past two years.

Following Munster final success Cork recorded a 20-point win over Ulster finalists Cavan in the quarter final before overcoming Ulster champions Monaghan by 3 points with two early goals in a wind assisted first half display. Dublin also overcame Ulster opposition in the quarter final with 6 points to spare against Donegal having trailed by 2 at half time before needing a free kick with the last kick of the game to break Mayo hearts in the semi final. Dublin manager Gregory McGonigle will be hoping his side can produce a first half performance like the one against Mayo and a second half display similar to the quarter final defeat of Donegal in order to deny Cork a sixth in a row title.

An impressive facet of Dublin’s play is their intensity, workrate and willingness to win the ball back. Against Donegal they won the ball on 30 occasions via Turnovers; 6 of which were dispossessions. 1-7 of their 1-13 total originated from a turnover with the goal coming from a dispossession in the offensive third of the pitch. Against Mayo the number of turnovers was 29; forcing 7 dispossessions and contributing to 2-5 on the scoreboard. Providing context to the turnover count in comparison to the number of possession the opposition had. Dublin’s turnover rate has been 67% (v Donegal) and 57% (v Mayo) meaning Dublin win 6/7 turnovers for every 10 possessions the opposition has.

When defending Dublin are keen to apply pressure on the ball carrier, as illustrated in the image below. 5 Dublin players advance to deny Cora Staunton the opportunity to shoot with 11 in total occupying defensive positions protecting a 6-point lead. The second image provides a snapshot of Dublin’s set up as they transition from a short kickout into attack. Sinead Aherne provides a pivotal outlet to secure first time possession up front allowing the players like Carla Rowe and Noelle Healy to make the supporting transition from defence to attack. 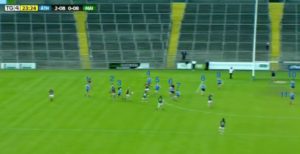 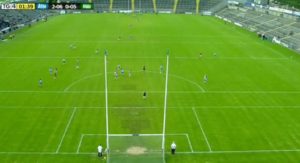 Despite the mass numbers in defence a weakness in Dublin’s willingness to force turnovers has been the number of fouls committed. Conceding 24 fouls in both games with 12 (v Mayo) and 10 (v Donegal) in the defensive third. From that Mayo converted 0-6 from 11 shots from frees and Donegal scored 0-5 from 7 set pieces. In addition, losing the ball on 5 occasions due to technical fouls against Mayo.

High levels of intensity and workrate are not element lacking in Cork’s play as their Turnover rate against Cavan was an impressive 78% and 56% against Monaghan. However unlike Dublin, Cork seem to show greater aggression when it comes to winning kickouts. Having won 9 of Monaghan’s kickouts they converted 0-3 and Cavan were shown less mercy as they scored 1-3 from 9 Cavan kickouts won. Retaining 8/9 (v Cavan) and 20/24 (v Monaghan) of their own kickouts but only leading to 0-1 and 1-3 on the scoreboard in the respective games could be an area of focus going into the final. Dublin have only won 10/46 opposition kickouts in the last two games so there is reason to believe Cork may enjoy similar number of possession originating from their own kickouts providing a platform to improve their scoring productivity from own kickouts won.

Cork have displayed elements of resolute defending in both previous games having kept Cavan scoreless from the 27th minute and holding Monaghan to two points in a 31-minute period between the 17th and 48th minute. Although Monaghan’s shooting was greatly affected by a strong first half wind. The discipline in defending by Cork is contrast to Dublin having only conceded 3 fouls in the defensive third of each game leading to a total of 0-3 conceded from frees.

In attack Cork have an eye for goal, largely due to the ability to delay the final pass, drawing the last defender or goalkeeper out of position. In tandem with a support runner who is provided with a near certain goal scoring opportunity. Illustrated below as Rena Buckley waits until the Monaghan defender has committed to the tackle before passing to Orla Finn (image 1) who in turn protects the ball from the approaching goalkeeper before setting Ciara O’Sullivan up to palm into an open net having continued her support run to the end line (image 2). 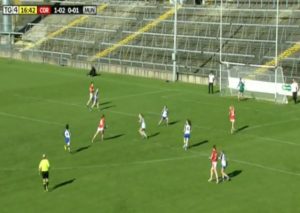 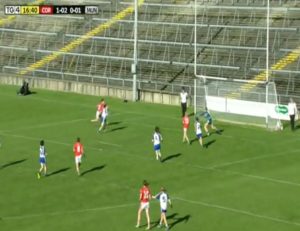 Cork’s shot accuracy from play however has been sub-standard to average converting 44% of 36 shots from play in the quarter final and less in the semi final 36% from 25 shots against Monaghan. A likely mass defence by Dublin may restrict the number of shots from play. Or will the experienced Cork attempt to draw scoreable frees from the previously highlighted ill disciplined Dublin defence?

Since 2005, the beginning of Cork’s dominance of Ladies football, the average total score by the All Ireland final winning team has been 16 points whilst conceding 11 points in total. The 5-point average winning margin is partially due to large victories by Cork in 2008 and Dublin in 2010, as on 6 occasions the winning margin has been 2 points or less since 2005. In 10 final appearances Cork have scored goals in 8 and kept clean sheets in 6, testament to their eye for goal and resolute defending.

Ultimately the upper hand in All Ireland final lies with Cork having defeated Dublin in the previous two encounters. There are signs Dublin have learnt lessons from these defeats, in the quarter final Gregory McGonigle introduced an extra defender with 5 minutes to go to protect a sixth point lead. Sinead Aherne displayed nerves of steal to earn victory in the semi final with the last kick of the game after Dublin withstood the Mayo onslaught at the other end. Although changes in personnel on and off the pitch for Cork this season may provide Dublin with a slight advantage on Sunday, however, it is difficult to underestimate the experienced Rebelettes. 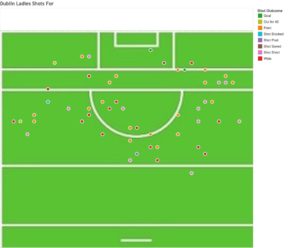 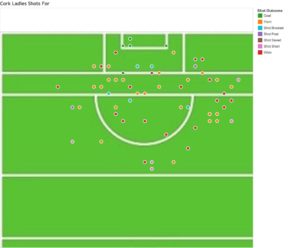