Killeavy had a minor advantage in the share of possession edging it by 3. From their total of 56 possessions 36 came from turnovers. Although a staggering figure from a Killeavy view point the manner in which the ball was turned over is what will disappoint the Eire Og management team most. 13 of the 36 turnovers were a result of unforced errors or shots dropping shot by Eire Og. However, the workrate by Killeavy is the middle third of the pitch has to be commended as they won 16 turnovers compared to Eire Og’s 10 in this sector. The two Killeavy goals originated from balls turned over in the middle third.

Possession is considered a major factor when carrying out match analysis in Gaelic football, however a higher number of possessions does not necessarily correlate with a greater chance of success. It is the ability of teams to generate attacks, creating scoring opportunities and most important be productive in translating those possessions into scores.

At the start of the 2016 Ulster Senior championship, Kevin McGuigan Ulster GAA Sports Scientist outlined that achieving a Productivity return of 0.30 or greater was a typical threshold associated with winning teams. Simply put, this means a team would be looking to score 3 points for every 10 possessions.

Both teams were below this productivity threshold from their possession returns with the two Killeavy goals being the major difference at the final whistle. A 16 point (2-10) return from 24 shots operating at 50% accuracy is what will please the Killeavy management. However, the number of scoring chances created is an area to improve on giving their high number of possessions and attacks.

A short kickout strategy implied by Killeavy was beneficial in terms of retaining possession as they lost out in the battle in the middle third, however they must look to improve the productivity returns from these possessions as they failed to register a score originating from the 7 short kickouts won.

As highlighted previously Killeavy will be pleased with their shooting accuracy but may look to increase the number of shooting opportunities they create. A contributing factor of their shooting accuracy was the ability to shoot from high percentage return areas; the pitch location below shows they converted 9 chances from 13 inside the opposition 21m line, a result of 2-7 on the scoreboard.

Eire Og on the other hand were a little more sporadic with their shot selection and is something for the management team to highlight. The pitch location below illustrates that their highest shot accuracy came in the two middle zones (5/7) also known as the ‘scoring zone’ so a simple target is to attempt to work more shooting attempts from these areas.

The scores timeline is a great visual tool to follow the pattern of play in a game. From the timeline in this game it is easy to assume that Killeavy were always in control, taking an early 5-point lead before Eire Og registered their first score on the 18th minute. This led to 3 points in quick succession before Killeavy struck with their first goal to provide some breathing space before half time. In the second half Killeavy went 18 minutes without a score, Eire Og were dominated but missed a crucial long distance free to cut the deficit to one point when they had ceased momentum in the game. 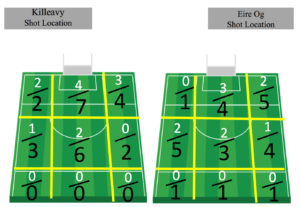