Mullaghbawn held the advantage with 5 greater possessions of the ball. In an evenly contested first half the scoreline was reflective of the possession count with Mullaghbawn slightly dominant (25-24) as the sides entered the break level on 0-6 a piece.

Turnovers were the greatest source of possession for both teams; Mullaghbawn 23/45 and Shane O’Neills 25/40. The number of turnovers won can be used by some coaches as a quantitative measurement of workrate. In this game it could easily be assumed the workrate of both teams was relatively high in the first half in comparison to the second half. Of Mullaghbawn’s 23 turnovers 16 were in the first half likewise, 15 out of Shane O’Neills 25 turnovers came in the opening period.

Possession is considered a major factor when carrying out match analysis in Gaelic football, however a higher number of possessions does not necessarily correlate with a greater chance of success. It is the ability of teams to generate attacks, creating scoring opportunities and most important be productive in translating those possessions into scores.

At the start of the 2016 Ulster Senior championship, Kevin McGuigan Ulster GAA Sports Scientist outlined that achieving a Productivity return of 0.30 or greater was a typical threshold associated with winning teams. Simply put, this means a team would be looking to score 3 points for every 10 possessions.

Mullaghbawn achieved this associated threshold with a productivity return of 0.31, the goal from a penalty being the decisive score in the game. Although both teams were equal in shooting accuracy; 44% and Shane O’Neills with a higher % of shots from attacks, it was ultimately Mullaghbawn’s greater ability to generate more attacks and create more shots from their small dominance in possession, particularly in the second half, that saw them victorious.

From a total of 36 kickouts in this game Mullaghbawn were dominant winning 21 versus 15 for Shane O’Neills. Gaining possession from 11/16 of their own kickouts Mullaghbawn broke even winning 10/20 of the oppositions kickouts creating a strong platform to build attacks and immediately put Shane O’Neills defence under pressure.

As highlighted previously both teams had a total shot accuracy of 44% although Mullaghbawn had 2 more shots. 12 of Shane O’Neills 25 shots came from set pieces returning a 52% conversion rate, however they will be disappointed in the 31% accuracy return from 13 shots from play. As illustrated in the shot location image below, shot selection could be a contributing factor, particularly the zero return from 2 shots in the classified ‘scoring zone’ and 3/6 closer to goal. Whereas 50% of Mullaghbawn’s scores came inside this area.

Mullaghbawn’s accuracy from set pieces was critical to their attacking performance, scoring 1-4 from 7 set piece efforts including the late penalty. Their return from play was less pleasing 31% from 20 shots. For both teams to progress in this campaign they will need to improve on their scoring accuracy from play. 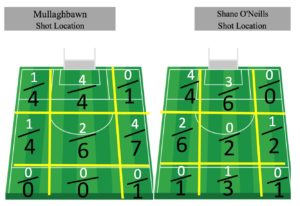