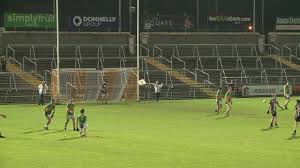 Mullaghbawn ran out convincing winners in their opening round clash of the Intermediate Championship, against Middletown on Monday evening. Led by danger man Eddie English, who top scored on the night with 6 points from play, they march on to the second round of the Championship on a score line of 1-13 to 0-9.

It was the victors who got off to the best start with two points in as many minutes through Cormac Smyth and Eddie English. Mullaghbawn dominated the early proceedings, as they won 5 of the game’s first 6 kick outs, with both their scores coming from break balls in the middle of the field.

Mullaghbawn answered back with points from Ruairi McCann and Kieran Grant, while continuing to have control in midfield, winning a total of 8 out of 12 kick-outs in the opening 20 minutes. Another Mullaghbawn attack broke down leading to a Liam Woods point for Middletown, with 2 of their 3 scores coming from turnovers in their own defence. Middletown’s width in attack (11 of their 14 attacks coming down the wings) led to another score to reduce the deficit to the minimum with Chris McCann’s first point of the evening. Middletown’s David Carville split two Eddie English points, before the ref blew the half time whistle leaving the score Mullaghbawn 0-7 to Middletown 0-5.

Mullaghbawn’s launch pad for attacks came from their own kick outs, as they retained 70% of them, with 3 of their 7 points coming from their own restarts. 4 of Middletown’s 5 points came from turnovers as they turned over 8 of Mullaghbawn’s 20 attacks in their defensive third. However, only a third of Middletown’s attacks were converted to scores, while 33% of their attacks went wide.

The second half began with a wonderful Eddie English point, where he soloed on the left before splitting the posts with his right foot. Mullaghbawn then scored the game’s only goal, 8 minutes into the second half, when an Eoghan McDonnell pass cut open the defence to leave Kieran Grant 1 on 1 with the goal keeper, before hitting the roof of the net. A Mullaghbawn turnover allowed Barry McKinley to put his side in front 1-10 to 0-5, with 2 of their opening 4 scores in the second half coming from turnovers.

It took Middletown 13 minutes to open their account in the second half with David Carville providing the point before Patrick McBride left 5 between the sides. Middletown’s purple patch continued with corner back James McKernan scoring from yet another turnover, their 19th of the game. 10 of these coming in their defence third, providing 50% of their scores.

Patrick McBride’s third point of the game left three between the teams with what seemed a nervy 8 minutes remaining, however, Mullaghbawn found another gear to kick the final 4 points of the game which led to victory, while Middletown failed to register another score.

Eoghan McDonnell was again involved as he kicked a point, which was followed by a Kieran Grant score, while Eddie English and Cormac Smyth finalised a dominant period for Mullaghbawn with the score line reading 1-13 to 0-9 at the full time whistle.

Mullaghbawn failed to have the same dominance from kick outs in the second half as they won only 3 of the 16 kick outs (2/7 of their own); however, this didn’t dent their confidence in this area as they turned the ball over 9 times in centerfield.  This allowed them to affectively counter attack with 6 of their total 7 scores coming from turnovers in the second half.

Middletown dominated their own kick outs in the second half winning 8 from 9. Providing the platform for their 19 attacks in the second period. However, their efficiency in front of goal let them down as out of 25 shots, only 36% of these were converted to scores.  They kicked 8 wides and dropped 5 short, with only 2 points being produced as a result of winning their own kick outs. 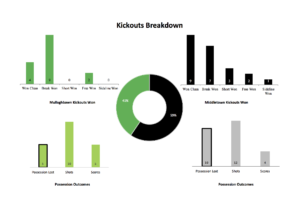