Killeavy displayed both heart and determination to hold off a resilient second half comeback by Silverbridge to become Intermediate Football Champions for 2017. Topping of a great year having already been promoted to the senior division through league performances. Silverbridge also gained promotion for next season, winning the league, confirming the final’s pair as the two best teams throughout the year.

Silverbridge opened the scoring with their first attack on the 3rd minute when Jarly Og Burns raced through on goal and fisted the ball over the bar. An instant reply from Killeavy levelled the game when a neat one-two pass between Ronan McGuinness and Raymond Teggart creating the chance for McGuinness to swing the ball between the posts.

McGuinness then chipped his side ahead reacting quickest to a 45 dropping short, to fire the ball over for his second. The next score came 6 minutes later and it was again Killeavy who kept the scoreboard ticking over. This time through Cathal Boylan, who had won his sides own kickout before driving forward for a point.

Killeavy dominated the kickouts in the opening 10 minutes, winning 6 out of 9. While converting 2 points from their own restarts. The margin was reduced to the minimum when Ronan Reel converted a point from a free. Both his sides points coming from results of turnovers, as Silverbridge turned Killeavy 7 times in the opening quarter.

The victors soon doubled their lead when Teggart chipped over a free before Damian McCann responded for Silverbridge after Peter Carragher had turned over a Killeavy attack. This left the score reading Killeavy 0-4 to Silverbridge 0-3, with 10 minutes remaining until the end of the half.

This would be Silverbridge’s final score of the first period however, as Killeavy began to take control of the game. The influential Conor O’Neill opening his account with a pointed free. Killeavy had now converted 63% of their 8 shots. While Silverbridge could only manage a return of 33% from their 9 shots.

O’Neill was once again on target from the dead ball after a brilliant pass by Cathal Boylan saw James Donnelly fouled straight in front of the Silverbridge goals posts. With O’Neill’s conversion, this now meant that the score was 0-6 to 0-3. 50% of Killeavy’s scores coming from free kicks.

Two more Killeavy points finished the half.  Michael Murphy popping up with a point before a beautiful dummy from Conor O’Neill created the space he needed to curl the ball between the uprights. O’Neill’s point (his 3rd in 9 minutes) left the score line reading Killeavy 0-8 Silverbridge 0-3 at the break. 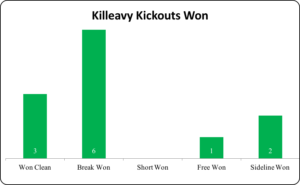 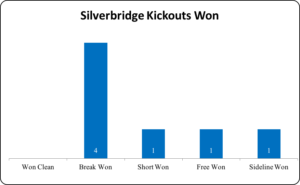 Killeavy dominated their own kickouts in the first half, retaining 7/8, and 3 of these being converted into scores. They also scored 3 times off the back of turnovers, turning over Silverbridge 12 times (8 in defence) during the half. Killeavy attacked the Silverbridge defence 19 times in the opening period, getting off 14 shots, while converting 57% of them.

All of Silverbridge’s scores in the first half came from turnovers, as they turned Killeavy over 13 times, 7 of which came within their own defence. Silverbridge also only won 6 of their 11 kickouts. They had less attacks than their opponents, with 16 in total, converting 30% of their 10 shots on goal.

Raymond Teggart opened the scoring for the second half with a free after Miceal McNamee was fouled. Paddy Reel won the resulting kickout for Silverbridge, producing an attack which lead to Joe Rock leaving the margin between the sides at 5 points.

A free won by Damian McCann after he turned over the ball in the attack third meant that Peter Carragher reduced the margin with a converted free. 80% of his sides’ scores coming off the back of turnovers, as they had turned Killeavy over 5 times in the opening 10 minutes of the 2nd half. Silverbridge once again struck for a point, with McCann getting the score this time after a pass from Jamie Murphy.

Killeavy reduced the pressure with a well worked point from Kyle Mallon, after a patient build up play. However Silverbridge tried to close the gap once more with Ronan Reel splitting the posts after a brilliant long range pass from Peter Carragher, turning defence to attack.

Silverbridge struck once again, this time through substitute Eugene Byrne, with Carragher again getting the assist. This left the score 0-10 to 0-8 to Killeavy. This was as close as Silverbridge could get however as Killeavy drove ahead with the next 3 scores in as many minutes.

Peter Carragher scored another free kick to reduce the deficit to 6 with 5 minutes of normal time remaining. Bringing his sides’ shot conversion rate to 45%. Ronan Reel knocked over an easy free from the 14 metre line to bring his side within 5 points. However it was Killeavy who again drove on with Ciaron O’Hanlon kicking a point after Silverbridge had been reduced to 14 men. 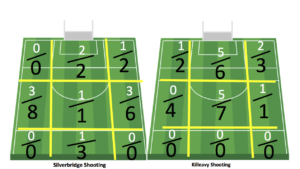 Killeavy didn’t have the same domination from their own restarts in the second half, as they won on 6/11; however, they were still able to convert 50% of their retained kickouts into scores. They returned a shot conversion rate of 61% throughout the game. Scoring 14 of their 23 shots, kicking 6 wides and dropping 2 short, while also hitting the post once.

Silverbridge converted 50% of their 22 shots with 6 of their points coming from open play. They also won 67% of their own kickouts, 4 of which were turned into scores. 1 of their points came from a throw up,  6 originating from their 25 turnovers. 11 of the uronvers coming in middle third.

Silverbridge had the most attacks between the 2 sides, with 36 throughout the entire game.  Killeavy turned the ball over 19 times in their own defensive third, producing a platform to counter-attack. Which they did effectively, scoring 6 points as a result of turnovers.